You are here: Home » Courier News » Opinion » Does Fair Trade exist in the UK when it comes to transport and logistics?

Does Fair Trade exist in the UK when it comes to transport and logistics?

With the shift to self-employment increasing, what can owner-drivers and independent couriers do to earn a fair living when sub-contracting for other companies? 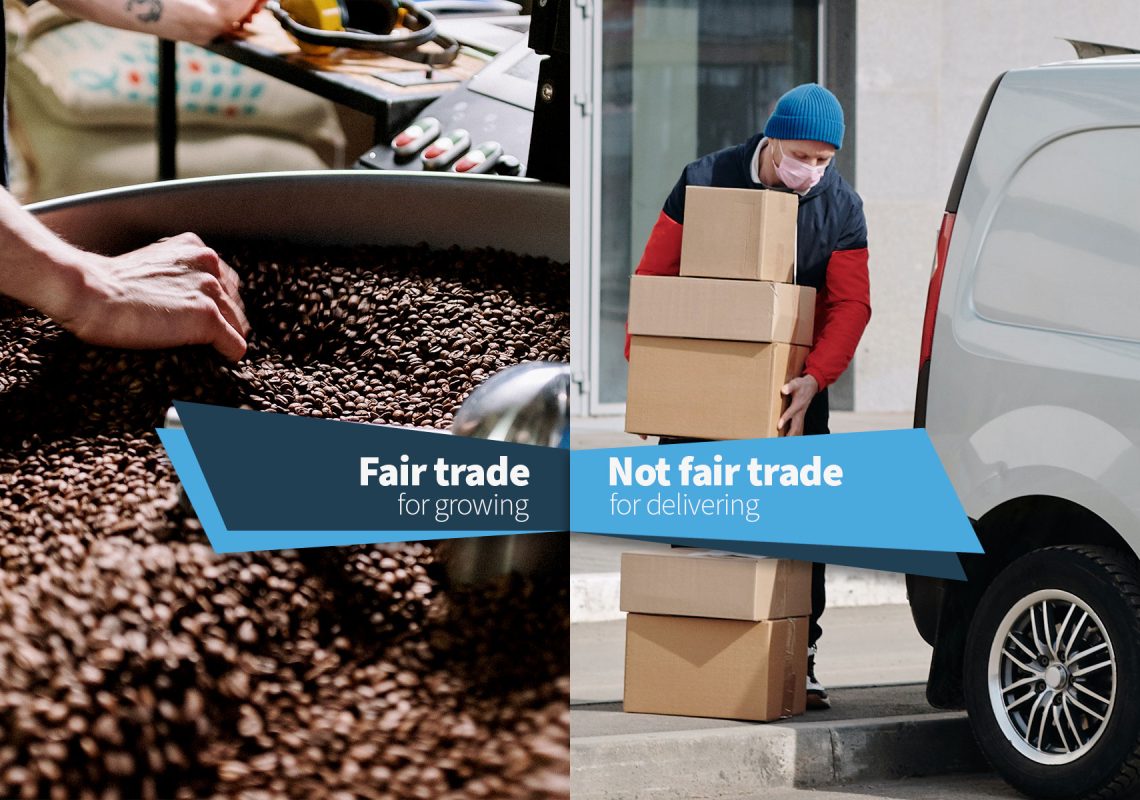 I’m sure you’ve heard of Fair Trade, right? It was a buzz word a few years ago and there’s an actual organisation that aims to legitimise the whole idea to support mostly third-world food and drink producers. It brought up the issue that they mostly received poor recompense for the crops they produced. Think Banana’s, Coffee, Tea etc.

What we want to know is;

Is there any such thing as Fair Trade when it comes to the earnings that individuals and small businesses achieve in the UK?

We all know there is a minimum wage when you’re employed by a company, but when it comes to self-employment, there is no limit to how low your earnings can go.

Should there be a MINIMUM RATE PER MILE for all types of delivery?

Are you really earning a fair rate for the deliveries you do?

This is an important question during a ‘cost of living crisis’.

Just look around at the current situation in the UK;

But when it comes to your self-employment, how are you coping? Have you managed to increase your rates? Or have your margins been squeezed by companies that continue to pay rock-bottom prices for your services as a courier?

If big companies run owner-drivers out of business, nobody wins.

Owner-drivers are the life-blood of the transport industry. If the top-tier courier companies had to take on full time (PAYE) enough drivers to cover their work, and provide vehicles for those drivers, the overheads would crush those businesses as soon as the quieter spells arrive (typically Jan-March, July-September).

10-15 years ago there was a wave of courier companies shedding vehicles and staff as they realised that services like Courier Exchange made it possible to use owner-drivers to cover individual loads. This drastically reduced their overheads and made them more efficient businesses.

If there are no independent drivers, companies will struggle to cover the work. They will either lose customers or be forced to employ drivers.

Tell us what rates companies are paying and let’s change the industry for the better.

We’re raising this because we’ve just been made aware of a large, well known courier company that has sent out a registration form showing their rates for sub-contactors.

And they are APPALLING.

There’s a chance the form is out-of-date and the rates shown may not have been updated in a while. We hope that’s the case.

But if this IS an up to date form, then the company in question is asking drivers to run at extremely low rates.

The kind of rates that were not great two years ago, but now are just awful.

So we want to know what the industry thinks.

If you want to try and help force change in the industry, then use the form below to tell us about a company you have worked for that you believe is offering terrible rates for the vehicle you operate.

You can remain anonymous. We’re not here to cause anyone any trouble.

We’re hoping this can be the start of a positive move for couriers in the UK.

If the cost of living won’t go back down, then we need to find a way to earn more just to survive.

What are we going to do with this information?

To start with, we will use the data to create a chart to see if there is a real difference between the rates people are earning, and what they think they need to earn to make a living. That’s what the original fair trade foundation is all about and something we want to mirror.

If it shows a clear problem, then we may list the names of the worst offending companies. Although we will most likely contact them first to discuss the matter.

This is not supposed to be a Witch-hunt. Let’s use it as a force for positive change for drivers.

Well paid drivers are likely to offer their services to the same company on a regular basis. They are also likely to either improve, or maintain their highest levels of service – which is good for the company.

All Posts »
PrevPreviousEncore Quadruples Female HGV Drivers in a Year